Ferrari is celebrating its 70th anniversary this year, so it's no surprise that the legendary Italian automaker played a large part in the 2017 Pebble Beach Concours d'Elegance this past weekend in the Monterey Peninsula.

Scroll down below to read about some of our favorites with descriptions courtesy of the Pebble Beach Concours Car Guide. 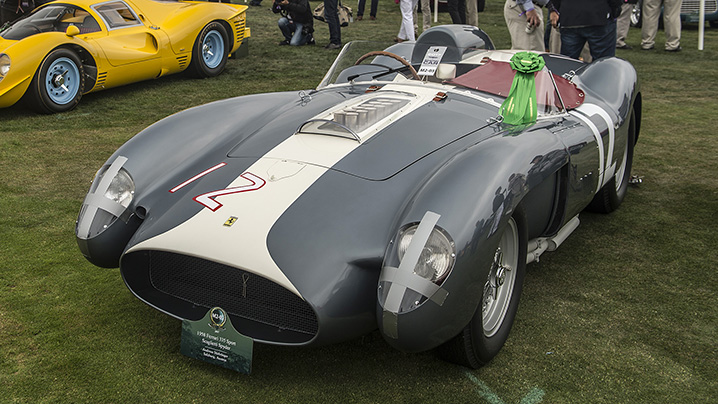 Three Ferrari 335 Sport Spyders with V12, 4-liter engines were built in 1957 — and then Luigi Chinetti persuaded Enzo Ferrari to build one more. This Spyder (chassis 0764) was completed by Scaglietti at the end of 1958. It was first presented at the New York Auto Show and was soon nicknamed the "Super Testa Rossa." Alan Connell purchased the car and raced it at Road America, Watkins Glen, Daytona and Nassau in 1959 and 1960. Thereafter it was owned, driven and enjoyed by several different collectors, and in 1990 it was notably lent to Phil Hill to drive in the Mille Miglia Storica. The current owner acquired the Spyder in 2013. 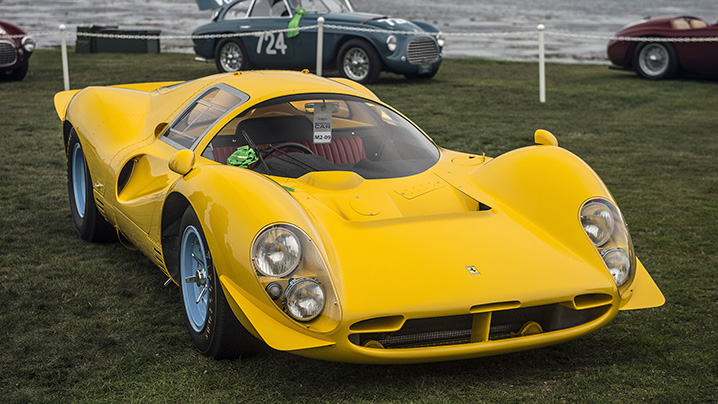 To replace the successful Ferrari P3, the factory developed the intermediate 412 P race car — also known as the P3/4. Designed by Mauro Forghieri, the 412 P features an aluminum body that owes its shape to the Ferrari wind tunnel, and the car develops 420 bhp due to its 4-liter, V12 engine with six Weber carburetors. This 412 P (chassis 0850) was purchased by the Ecurie Nationale Belge team of Jacques Swaters, and it raced in bright yellow livery at various events in 1967 and 1968. It finished second overall at the 1,000-km Race at Montlhéry in 1967, and it won the Cote de Condroz and Cote de la Roche Hill Climbs in 1968. The car was also entered in the 1967 24 Hours of Daytona when Ferraris famously finished 1-2-3. After its racing days concluded at the end of 1968, the 412 P was converted to street use for Dean Martin, Jr. and was often seen on roads around Hollywood. It is shown here at Pebble Beach for the first time since being restored to its original racing specification. 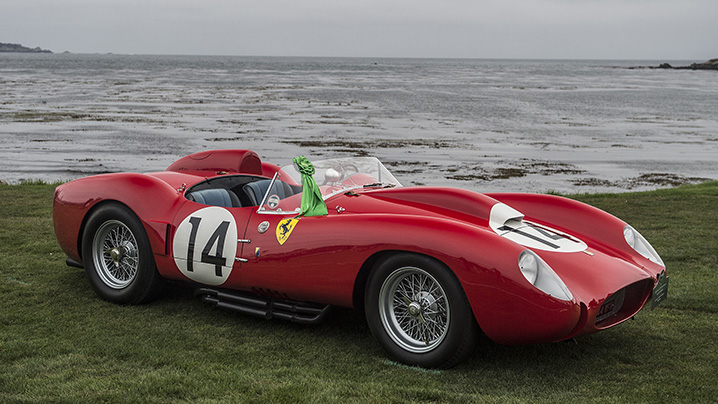 This Ferrari (chassis 0728) is one of the most famous of all Testa Rossas. It finished first overall at the 24 Hours of Le Mans in 1958 driven by Phil Hill and Olivier Gendebien, and it was third overall at that year's Targa Florio driven by Mike Hawthorn and Wolfgang von Trips. It is an original left-hand-drive Ferrari team car with outside door hinges and a fresh-air vent on the cowl (similar to 0666 TR). After the 1958 Targa Florio race, the car was converted at the Ferrari factory; the original pontoon fenders were removed for an envelope body. Several privateers later raced the car with a variety of different engines, as was normal at the time. It was sold eventually to Ferrari collector Pierre Bardinon in France, who reunited the car with its original engine. The current owner acquired the car in 2012. 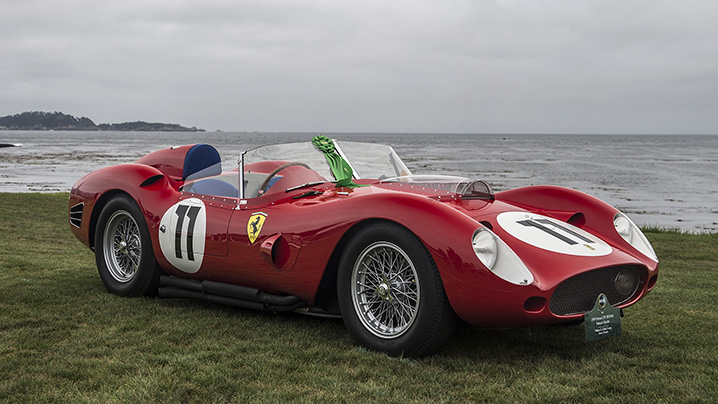 This Ferrari (chassis 0774 TR) was the fifth and final 250 TR59 constructed in 1959. It made its debut at the 24 Hours of Le Mans driven by Jean Behra and Dan Gurney, and it also ran in the Tourist Trophy at Goodwood driven by Phil Hill. After being updated in 1960 to new TR59/60 specifications, it won in its first time out at the Buenos Aires 1,000-km driven by Phil Hill and Cliff Allison. That June, Olivier Gendebien and Paul Frère drove the car to victory in the 24 Hours of Le Mans. It then moved to the United States where it was briefly raced again by Phil Hill. Following its own racing career, the car's V12 engine was used for a time in another racing car. This car and engine were reunited in the 1980s, when owned by Paul Pappalardo, and restored to its 1960 Le Mans–winning specifications. It was then raced throughout the 1990s. The current owner bought the car in 2004 and showed it at Pebble Beach in 2009 along with the other three surviving TR59/60s. 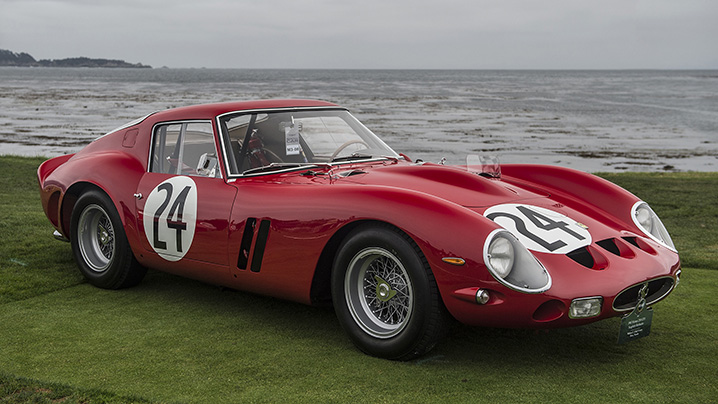 This Ferrari 250 GTO (chassis 4293GT) was first sold to Jacques Swaters of Ecurie Francorchamps in April 1963, and it enjoyed a short but spectacular racing career. In its first race at Spa in May 1963, the car was driven to first place by Willy Mairesse. A month later at Le Mans, it finished first in class and second overall driven by Jean Blaton and Gerhard Langlois van Ophem. Then, seeking to prove in true GT style that the car was just as good on the road as on a race course, Blaton and Ophem set off in the GTO to celebrate their success in the nightclubs of Paris. Their Le Mans win was followed by another outright win at Zolder and a first in class at Reims. Thanks to its comparatively short but spectacular race history, this car is one of the most original GTOs in existence. 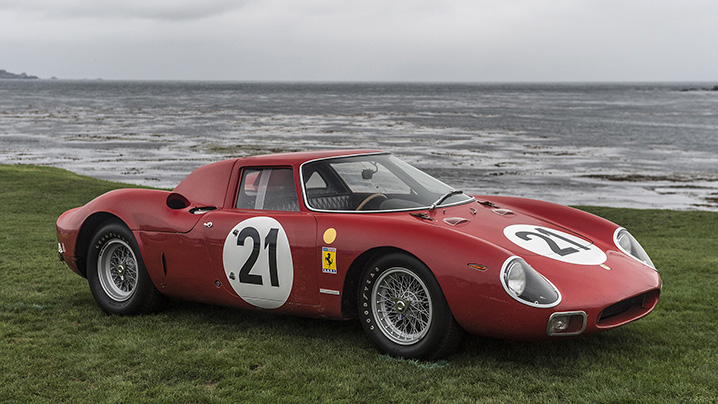 The Ferrari 250 LM, first seen at the Paris Automobile Show in October 1963, was built as the replacement for the 250 GTO to compete in the GT category of sports car racing, but Ferrari produced only 32 250 LMs, so the car was forced to compete as a sports prototype. Bodied by Scaglietti and featuring Ferrari's first ever mid-engined layout, the 250 LM proved to be an excellent competitor on the racetrack, beginning its career with a victory in the Reims 12 Hours in July 1964 where it competed for the Maranello Concessionaires and was driven by Graham Hill and Jo Bonnier. This car (chassis 5893) went one better; in the hands of Jochen Rindt and Masten Gregory driving for Luigi Chinetti's NART racing team, it was the last Ferrari to win the 24 Hours of Le Mans, taking the crown in 1965. It raced for another five years in long-distance races at Daytona and again at Le Mans, then it was officially retired. It is here today thanks to the Indianapolis Motor Speedway Museum. 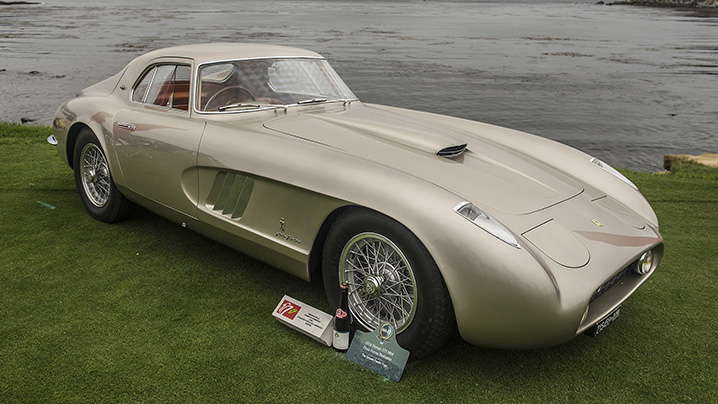 First shown at the 1954 Paris Auto Salon, this unique Ferrari 375 MM Berlinetta (chassis 0456AM) is fitted with a special body designed and constructed by Pinin Farina. Original carrozzeria records state that this car was used as the styling study for the 275 GTB built ten years later. Among its most striking features are the rotating headlights and the fins on the rear fenders. This car was ordered by film director Roberto Rossellini for his wife, Swedish actress Ingrid Bergman, and even though she never took delivery of the car, it is still referred to as the "Bergman Coupe." Rossellini owned the car between 1954 and 1957, and then it went to the United States. This famous Ferrari has been with its current owner for 39 years. It recently participated in the 1,500-mile Pebble Beach Motoring Classic.