All lightning, no thunder: building an electric AC Cobra It’s grey. By which I mean both the car and the weather. While there are the vestigial remains of some Shelby stripes on the boot and the nose, the Cobra that rests on axle stands is currently a dull, plain grey, with the monotony broken only by some patches of rubbed-down filler. Those patches are covering up what used to be holes for a fuel filler and exhaust exits.

This Cobra, based on a Dax-bodied replica, doesn’t need those any more. The 4.0-litre Rover V8 that once powered it rests on the floor of AVA Electrifi’s workshop in the picturesque Wicklow mountains, gently dripping oil into a pan.

AVA Electrifi is the brainchild of Norman Crowley, a Cork-born entrepreneur who has made his fortune developing low-carbon monitoring and logistics systems for big companies. Taking that low-carbon dream to its limits, Crowley’s home-grown car company is not only converting existing classic cars to electric power but also has dreams of creating his own retro-styled, 2000bhp electric ‘hyperclassic’ model.

“Back in 2019 when we started this, if you said at a dinner party that you wanted to put electric motors into classic cars, no one wanted to talk to you.” says Crowley. Dressed in shorts and an Ava-branded shirt, he's remarkably open and chatty, certainly compared with normally reticent and PR-monitored car company chiefs.

“We had done some car conversions before, such as putting a Tesla motor and batteries into a Ferrari 308 that had blown its engine, but Ava is about the next level up — a vehicle that’s rebuilt from the ground up, with every annoying thing that was in it got completely right.”

Sadly, that rightness doesn’t yet extend to the electric Cobra. Sitting tantalisingly in the pitlane at Mondello Park, just outside Dublin, under the skin there’s a circa-500bhp electric motor driving the rear differential and enough battery capacity under that sensuous nose to run for around 20 minutes at race track speeds.

It’s not running, though. Its battery got held up at customs for almost two weeks, so it’s now being swarmed over by the Ava team trying to get it ready to ship to Salon Privé, and they’re running out of time. There it will be auctioned and some of the proceeds donated to climate-change charities.

Hang on – a dusty old replica Cobra, with a battery instead of a V8, sold at Salon Privé? Oh yes, and it’s going to sell for big money – seven figures, most likely. Because there’s a story here…

Ava Electrifi’s offices are to be found in Powerscourt House, a one-time stately home just south of Dublin that was, in period, owned by the Guinness family. Scion of that porter dynasty, Tara Browne, famously owned a Cobra back in the 1960s and had it painted in a psychedelic colour scheme by artists Douglas Binder and Dudley Edwards.

Browne, Binder and Edwards were at the heart of the swinging sixties and all but inevitably palled around with The Beatles. The colourful Cobra was exhibited in the Robert Fraser Gallery in Mayfair and had people queuing around the block just to see it.

And then, tragically, Browne was gone – killed in a crash in one of his other sports cars, a Lotus Elan. It’s Browne’s life and premature death that inspired McCartney and Lennon to write A Day In The Life. That original Cobra still survives (it’s actually taxed and MOT-ed) but was repainted in a more dour colour scheme at the behest of the Guinness family.

“We tried to source the original car,” says Crowley. “We did find it but kinda felt that it wouldn’t have been right to take the engine out of that one. It should be left as Tara drove it.”

As he says these words, he glances out of his office window and across the rolling hills towards the hunting lodge in which Browne lived when he wasn’t swinging his way around London.

The electric Cobra won’t be grey for much longer. Edwards, the man who painted both Browne’s original car, and – more recently – Paul McCartney’s piano, is going to paint Crowley’s electric recreation, and it’s the paint scheme as much as the car itself that will garner attention at the Salon.

Where next for Crowley? He says, candidly, that he doesn’t want to try to create an Irish Tesla. His next projects include a 2000bhp Stingray based on a 1963 Chevrolet Corvette, with a new body co-created by Peter Brock (the original Stingray’s designer) and ex-Jaguar designer Ian Callum.

A handful of those ‘hyperclassics’ will be built, and Crowley hints at another Brock-designed classic coupé that’s in line for the electric treatment. He’s also working on a series of re-imagined Land Rover Defenders, with massive batteries for long-range driving.

“It isn't about making volume, it's about making cars,” says Crowley. “It’s about inspiring, about helping the rest of the business, which is about energy efficiency and renewables and cooling the planet.

"When you were a kid, did you have a poster on your wall of a car? That’s what we want to make…” 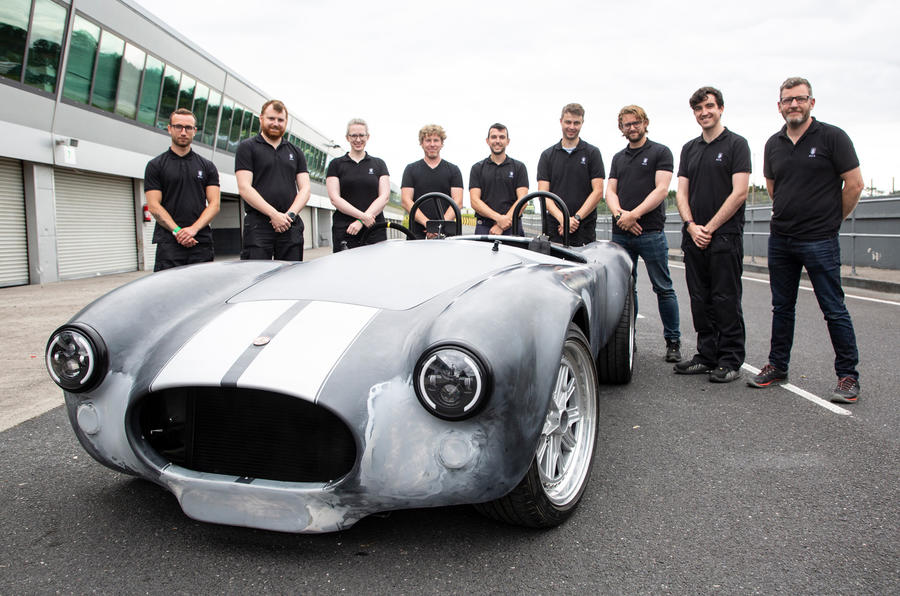